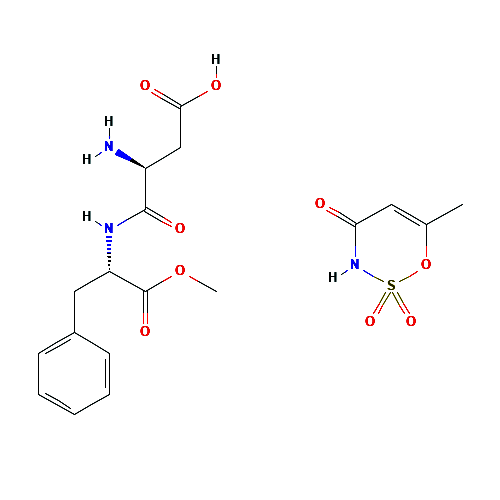 Global Calcium is one of the leading manufacturers and exporters of Aspartame Acesulfame CAS no. 106372-55-8, Mineral Actives . We support the customers with exhaustive documentation. As a USDMF & EU-GMP certified global company and an established hallmark for pharmaceutical standards, Global Calcium has stood the test of time since its inception in 1979.

As manufacturer of Aspartame Acesulfame we hereby state the following facts about the drug:

Aspartame, discovered in 1965 is a low-calorie sweetener with a sugar-like taste but is approximately 200 times sweeter than sucrose. It is unique among low-calorie sweeteners in that it is completely broken down by the body to its components - the amino acids, aspartic acid, phenylalanine and a small amount of ethanol. These components are found in much greater amounts in common foods, such as meat, milk, fruits, and vegetables, and are used in the body in the same way whether they come from aspartame or common foods. It was approved by the US FDA in1981. Food Standards Australia New Zealand (FSANZ) and other international regulatory agencies have approved aspartame for general use in a range of foods including table top sweeteners, carbonated soft drinks, yoghurt and confectionery.

Acesulfame potassium is a non-caloric sweetener with a clean, quickly perceptible sweet taste. It has excellent stability under high temperatures and has good solubility. So it is suitable for numerous products. In 1998, acesulfame K was approved by the US FDA for use in liquid non-alcoholic beverages and in 2003, general use approval was granted. The Joint Expert Committee on Food Additives (JECFA), the scientific advisory body to the World Health Organization and the Food and Agriculture Organization of the United Nations, reviewed the available research on acesulfame K and stated that it is safe. Since both Aspartame and Acesulfame are FDA approved sweeteners, these can be used in combination as well. The advantage of using a processed twin salt rather than their physical mix is the palatability and flavour enhancing ability, as in the processing, potassium is being removed from the Acesulfame, which is not possible to be achieved when a physical mixture is prepared.

Aspartame-Acesulfame is a high intensity sweetener used in different applications and is reportedly 350 times sweeter than sugar.

To assist in weight loss

Some people choose to limit their food energy intake by replacing high energy sugar or corn syrup with other sweeteners having little or no food energy (sugar substitutes). This allows them to eat the same foods they normally would, while allowing them to lose weight and avoid other problems associated with excessive calorie intake.

Although liquid preparations are particularly suitable for children, many contain sucrose which encourages dental decay. Unlike sugar , sugar substitutes are not fermented by the microflora of the dental plaque. In view of this harmful effect, doctors have been recommended to prescribe sugar-free (having sugar substitutes) medicines whenever possible.

People with diabetes have difficulty in regulating their blood sugar levels. By limiting their sugar intake by substituting sugar with artificial sweeteners, they can enjoy a varied diet also, some sugar substitutes do release energy, but are metabolized more slowly, allowing blood sugar levels to remain more stable over time.

Individuals with reactive hypoglycemia will produce an excess of insulin after quickly absorbing glucose into the bloodstream. This causes their blood glucose levels to fall below the amount needed for physiological function. As a result, like diabetics, they must avoid intake of high-glycemic foods like white bread, and often choose artificial sweeteners as an alternative.

Studies conducted with taste-test panels show that aspartame's taste is very similar to the taste of sugar. So it is used instead of sugar in various foods.

Aspartame has the ability to intensify and extend fruit flavors, such as cherry and orange, in foods and beverages. For example, aspartame makes chewing gum taste sweet and more flavorful longer than sugar-sweetened gum.

Individuals may opt to substitute refined white sugar with less-processed sugars such as fruit juice or maple syrup.