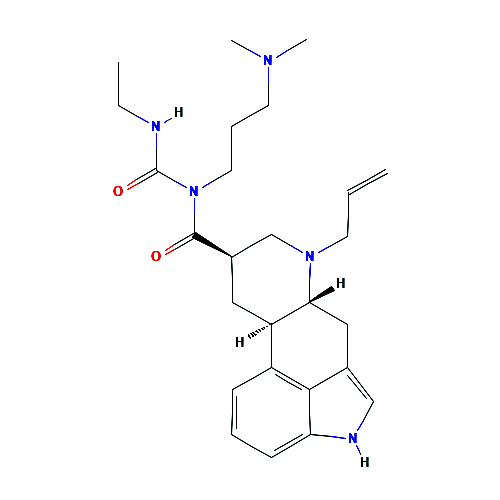 Global Calcium is one of the leading manufacturers and exporters of Cabergoline CAS no. 81409-90-7, API, (Active Pharmaceutical Ingredient). We support the customers with exhaustive documentation. As a USDMF & EU-GMP certified global company and an established hallmark for pharmaceutical standards, Global Calcium has stood the test of time since its inception in 1979.

As manufacturer of Cabergoline we hereby state the following facts about the drug:

Therapy of Parkinson’s disease: Cabergoline is well tolerated dopamine agonist, and produces significant improvement in the symptoms of Parkinson's disease. It improves motor symptoms, delays the presentation of levodopa-induced motor complications. Cabergoline is extremely useful in the treatment of sleep disturbances associated with advanced Parkinson's disease such as nocturnal akinesia and dystonia.

Ovarian hyperstimulation syndrome: This life-threatening iatrogenic complication associated with ovarian stimulation during assisted reproductive technology (ART) protocols such as IVF (Invitro fertilization)/ ICSI (intracytoplasmic sperm injection) can be effectively treated with the use of cabergoline.

Cushing’s disease: Dopamine agonists like cabergoline work on the principle that the demonstration of D2 receptor expression in corticotroph tumours and their ability to reduce ACTH and cortisol secretion. A higher affinity and specificity of cabergoline for D2 receptors in addition to its longer half-life explains its better efficacy in Cushing’s disease, which have ranged from 25 to 75% in short course treatment of persistent or recurrent disease.

Restless legs syndrome/ Periodic leg Movement Syndrome (RLS/ PLMS): Dopamine is needed to produce smooth, purposeful muscle activity and movement.  Dopamine agonists such as cabergoline are largely known to reduce symptoms of RLS / PLMS when they are taken at night-time and improve the morning motor symptoms.

Diabetes Mellitus: The use of cabergoline (dopaminergic agonist) reduces hypothalamic stimulation that increases during liver gluconeogenesis, lipids synthesis, and insulin resistance by increasing the level of dopamine and decreasing the level of noradrenergic action in the hypothalamus, resulting in enhanced insulin sensitivity in peripheral tissues.

Obesity: Pharmacologic agents such as cabergoline that increase dopamine release or inhibit dopamine reuptake can reduce food intake there by helping in the treatment of obesity.