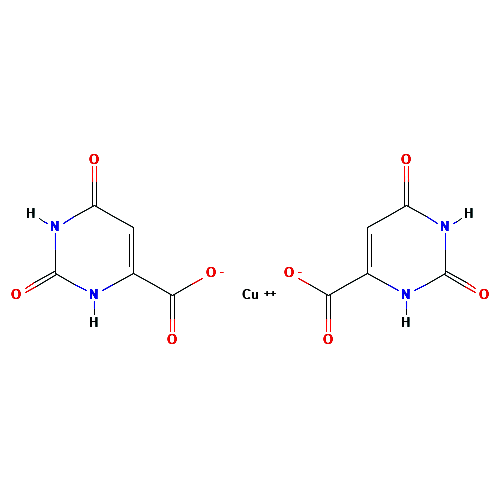 Global Calcium is one of the leading manufacturers and exporters of Copper Orotate CAS no. 61573-60-2, Mineral Actives . We support the customers with exhaustive documentation. As a USDMF & EU-GMP certified global company and an established hallmark for pharmaceutical standards, Global Calcium has stood the test of time since its inception in 1979.

As manufacturer of Copper Orotate we hereby state the following facts about the drug:

Copper is an essential trace element that is vital to the health of all living things (humans, plants, animals, and microorganisms). In humans, copper is essential to the proper functioning of organs and metabolic processes. The human body has complex homeostatic mechanisms which attempt to ensure a constant supply of available copper while eliminating excess copper whenever this occurs. However, like all essential elements and nutrients, too much or too little nutritional ingestion of copper can result in a corresponding condition of copper excess or deficiency in the body, each of which has its own unique set of adverse health effects.

Orotic acid is a precursor of the pyrimidine bases of nucleic acids in their biosynthesis. It was originally introduced as a vitamin, called vitamin B13, but essentiality has not been demonstrated. Orotic acid occurs mainly in milk from ruminants, with the highest amounts being found in animals that are deficient in arginine and uridine-5’-monophosphate activity. In cows’ milk amounts of 20-100 mg/L are found and somewhat higher amounts in goat’s and sheep’s milk. Orotic acid has also been detected in infant formula which is reflecting the range of cow’s milk.

Bioconversion reactions of orotic acid occur in the presence of enzymes. Their activation and normal functioning require metal ions. Orotic acid is synthesized in situ from carbamoyl phosphate and aspartic acid through dihydroorotic acid. Orotic acid is then transformed to orotidin-5’-phosphate and further to uridine-5’-monophosphate. When there is insufficient capacity for detoxifying the load of ammonia presented for urea synthesis, carbamoyl phosphate leaves the mitochondria and enters the pyrimidine pathway, where orotic acid biosynthesis is stimulated; orotic acid excretion in urine then increases. Orotic acid synthesis is abnormally high in hereditary deficiencies of urea-cycle enzymes or uridine monophosphate synthase.

Copper orotate is described as greenish-blue and iron orotate as a yellow-brown powder. All the salts of orotate are described as very slightly soluble in water and almost insoluble in ethanol and methanol. Copper orotate dihydrate belongs to the family of metalorganic substances which are accepted in medicine as compounds having enzymatic properties.

Copper orotate is traditionally used in these cases:

Very little toxicological documentation has been submitted concerning the toxicity of orotic acid and none on the salts. Orotic acid has low acute toxicity. In repeated doses, orotic acid induces fatty livers in the rat, but not in other species tested. No data were submitted on reproductive and developmental toxicity.