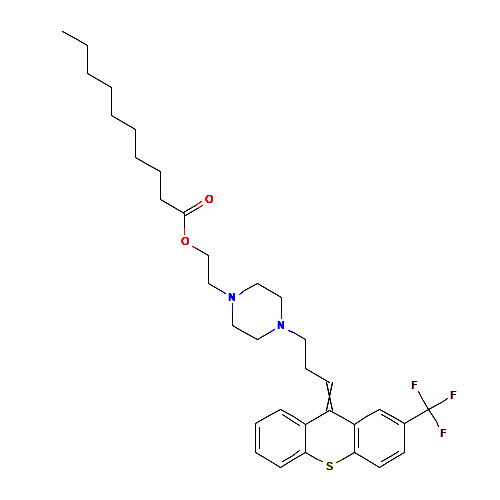 Global Calcium is one of the leading manufacturers and exporters of Flupentixol Decanoate CAS no. 30909-51-4, API, (Active Pharmaceutical Ingredient). We support the customers with exhaustive documentation. As a USDMF & EU-GMP certified global company and an established hallmark for pharmaceutical standards, Global Calcium has stood the test of time since its inception in 1979.

As manufacturer of Flupentixol Decanoate we hereby state the following facts about the drug:

Flupentixol is indicated for maintenance therapy of chronic schizophrenic patients whose main manifestations do not include excitement, agitation or hyperactivity. It is indicated for the management of depression in adult patients who may, or may not, also be showing signs of anxiety.

Flupentixol decanoate is usually used in patients who have been taking regular doses of flupentixol by mouth and may benefit from long-term (maintenance) treatment with less frequent dosing.

Flupentixol helps you to think more clearly, decreases hallucinations and negative thoughts, and makes it easier to function in everyday life. This medication is not recommended when agitation/hyperactivity are severe or in older adults with dementia.

Flupentixol belongs to a class of medications called thioxanthenes and is also known as a neuroleptic. It works by affecting the balance of natural substances (neurotransmitters) in the brain.

MOA: The antipsychotic actions are mainly thought to arise from cis (Z)-flupentixol, the active stereoisomer, acting as an antagonist at both dopamines D1 and D2 receptors with equal affinities.

Many antipsychotic agents work by blocking D2 receptors as antagonists; similarly, cis (Z)-flupentixol, the active stereoisomer, is an antagonist at D2 receptors.  However, there is now evidence that antipsychotic agents can work by blocking other dopamine receptor subtypes, such as D1, D3, or D4 receptors.  One study showed that cis (Z)-flupentixol is an antagonist at both dopamine D1 and D2 receptors with equal affinities, and binds to D3 and D4 receptors with lower affinities. It also binds to alpha-1 adrenoceptors. Antidepressant effects of flupentixol are understood to be mediated by antagonism at 5-HT2A receptors, which are commonly down regulated following repeated antidepressant treatment.  Flupentixol also binds to 5-HT2C receptors.

Flupentixol is an antipsychotic drug of the thioxanthene group. It exists in two geometric isomers, the trans (E) and pharmacologically active cis (Z) forms. Flupentixol decanoate is one of the active ingredients found in injectable drug formulations: it is produced by esterification of cis (Z) ?flupentixol with decanoic acid. Flupentixol is an antagonist of both D1 and D2 dopamine receptors.

Available as oral tablets or long-acting intramuscular injections. It is used for the management of chronic schizophrenia in patients whose main manifestations do not include excitement, agitation or hyperactivity. It has been marketed to manage symptoms of depression in patients who may or may not exhibit signs of anxiety. In combination with melitracen, flupentixol is used to manage symptoms of anxiety, depression, and asthenia